Summer Cottage at the beach

I grew up spending my summers at Pawley's Island, SC.  People called it plain and now it's considered "shabby chic" and a definite must be vacation spot....haha  Our house was on stilts, but a little farther inland the houses looked like the scene on my card with mostly sand in the front yard.  Ahhh...the sweet memories.  Someplace I would like to be this very minute.

Anyhooooo,  this is totally KittieKraft motif.  I just love her work and the inspiration she brings with her cards.  It's amazing what a few die cuts can create.  I sometimes draw/design my own svgs similar to the dies if I don't have a die...dies can get very costly. 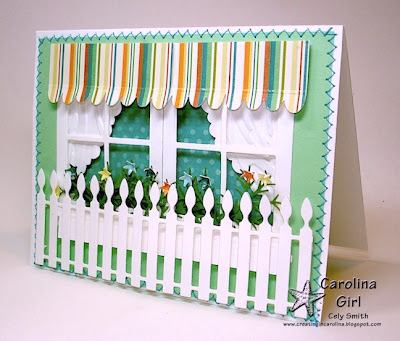 I made my own svg awning and used pop ups for added dimension. I used Poppy Stamps fence and  window dies.  I made my own extra long flower box svg (also using pop-ups for dimension).  I used an old McGill fern stem punch for my flower stems and I used the stars out of an old American Girl star borders punch for my flowers. I used some old designer scissors from Michaels for the curtain edges and used a tree bark embossing folder to give the curtains the look of draping.  Many pop-ups where added to the windows, curtains and fence for extra dimension.  I need to go buy some more pop-ups...haha 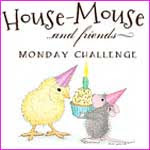